The digital humanities (or as the cool kids call it, DH) have been in my peripheral vision since my first year in grad school: something that looks useful and fun; but for someone who dreads calculating grades, working with data is intimidating. Last September, a series of DH events in a symposium on the future of the humanities inspired me to reconsider how the digital humanities fit into the humanities generally. This month, I’ll be looking at the human in the digital humanities in order to think about where the human is located in the humanities. To do this, I’m going to introduce to you some of my research on the Society of Jesus, or Jesuits, a missionary order of Catholic priests founded in Spain by Ignatius Loyola at the time of the Reformation. This focus is partly self-serving: I’m a dork and I love studying Jesuit literature even beyond my Early Modern period. But the connection between the Jesuits and the issues I’ll tackle is a lot closer than just my research. Ignatian philosophy on education, public service, and the relationship of the material to the ideal has greatly informed my appreciation of the digital and public humanities. 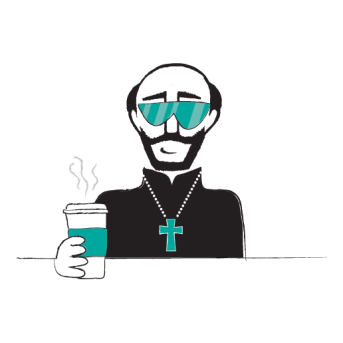 Time to get Iggy with it.

The first event I was able to attend in the DH series this past September was a workshop with Daniel Shore and Chris Warren on the new DH project they’ve launched, Six Degrees of Francis Bacon (or SDFB).* If you’re familiar with cinema’s (Kevin) Bacon Number, the principle is similar: the database maps degrees of separation between major and minor figures in Early Modern England based on the different kinds of relationships they had with each other. Francis Bacon’s network of relationships greets visitors on the home page: he is one degree of separation from Anne Bacon (“parent of” Francis), Elizabeth Hatton (“attracted to” Francis), and William Fulbecke (“collaborated with” Francis); and he’s two degrees of separation from the Archbishop William Laud (via Thomas Coventry) and Sir Edwin Sandys (via Sir Thomas Coke). Francis Bacon also belongs to the groups “Virginia Company” and “Company of Mineral and Battery Works,” and you can search just for members of a single group or for members of two groups (turns out Bacon is the only one in the database who belonged to both those companies). While the foundational information for SDFB was imported from the Oxford Dictionary of National Biography, new information is crowd-sourced: anyone can add a new person, add a person to a group, add a new relationship, or assign a new relationship type (for admin approval, of course). 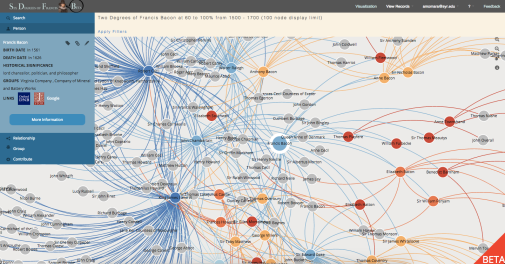 Two degrees of Francis Bacon. I can only hope to be so socially well-connected.

Before I started playing with SDFB the night before the workshop, I hadn’t really understood how any DH methodologies, outside of simple word frequency analyses, would be useful to my research. But as I clicked around the website, looking up individual English Jesuits whose writings I’d read, I began to appreciate the power of visual representation of the connections between these priests and the social circles they moved in during their work in England.

Some historical context about the sixteenth-century English Jesuit mission is helpful here. With the replacement of all Roman Catholic bishops with conforming Church of England bishops, and with the institution of the 1584 “act against Jesuits, seminary priests, and such other like disobedient persons,” English Catholics could no longer ordain their own priests to serve their communities. Politically, England was reduced to the same status as an Aztec, Chinese, or any other historically non-Catholic kingdom: it became a mission field served by foreign-trained priests, mainly from the expat community in Douai, France. Indeed, it could even be more hostile than other foreign mission fields: the 1584 act made it high treason to be a Catholic priest, and a felony to aid one; even suspicion of either crime could subject a person to any number of gruesome tortures.

Protestant-era England did have two advantages over other mission fields, however. First, most of the Jesuit missionaries serving in England were born there or descended from English families. And second, Catholicism was still fairly widespread in its underground status, with some families even managing to retain considerable wealth. English Jesuits had something of a home turf advantage, and these connections were crucial to carrying out their work in often hostile territory.

Some of the English Jesuit martyrs: Edmund Campion, Robert Southwell, and Alexander Briant (whose good looks were legendary).

When I came to the SDFB workshop the next morning, my goal was to help map the English Jesuits’ human networks of supporters, and I was thrilled to find that this was something in which I had the expertise to contribute and that it was something that was useful to my research. Because of SDFB, I could begin to really see just how tightly connected many of the Jesuit missionaries and their English supporters were, something I hadn’t recognized in the disparate texts I had read before. And I was very pleased to convince Drs. Shore and Warren to add “Jesuits” as a standalone group in addition to “Jesuit missionaries to England,” in order to account for expats who never returned to England.

The database is in beta testing, so there are still some quirks and bugs and inefficiencies. There is a terrible shortage of women in the database, as a consequence of how only 6% of the entries in the Oxford Dictionary of National Biography, from which the vast majority of SDFB is drawn, are for women.1 This is particularly problematic for my research, as recusant Catholic women were better able to fly under the English government’s radar (so to speak), especially if their husbands conformed, and thus were essential to Jesuit ministry: hiding priests, offering financial support, and granting access to printing presses. (If you want to help boost the number of women in SDFB, check out the Networking Early Modern Women event on January 23 at the Carnegie Mellon and Folger libraries and live online.)

Some features of the current design can also be shortcomings. A sometimes-limiting selection of terms used to categorize and group relationships can flatten their contours and conceal the dynamics. In some ways, broad strokes are necessary to even begin to sort relationships. For instance, “collaborated with” or “attracted to” mean different things to different people, but a general sense of what they could mean enables the first step of investigation. On the other hand, it was rather chilling to see Robert Southwell’s visualized relationships to Robert Persons (a Jesuit) and Anne Howard (a recusant and priest-harborer) given equal weight as his relationship to Richard Topcliffe — his torturer.

But these are the problems that are resolved by the humanities side of digital humanities. As I often remind my students, data does not an argument make. It doesn’t tell us anything — it must be interpreted. Thanks to SDFB, we can see the names, or the dates, or the likelihood of the relationships between people and the extent of their networks. But we need to read their texts and contexts not only to understand the difference between an ally and an enemy, but also to fully appreciate the contributions these figures made to literary history.

*Full disclosure: To my surprise and delight, I was made a curator for SDFB between writing this post and its publication. Opinions are very much my own.

Next week: EEBO and public-access literature

Ashley O’Mara (@ashleymomara | ORCID 0000-0003-0540-5376) is a PhD student and teaching assistant in the Syracuse University English program. She studies how Ignatian imagination and Catholic iconology shape representations of sacred femininity in Early Modern devotional writings. In her down time, she writes creative nonfiction and snuggles her bunny Toffee.