During my last month writing for Metathesis, I talked about the contemporary desire to find political meaning in Shakespeare’s plays. Then in June, Shakespeare in the Park staged a performance of Julius Caesar in which the actor playing Caesar consciously invoked the image of President Trump, mimicking his vocal affectation and his mannerisms. This performance was met with public backlash, as voices responded with anger at the idea of a publicly funded art institution staging the assassination of the sitting President. As someone who studies early modern drama, it was a surreal moment to see the nation spend a few days in the middle of Summer having a conversation focused on how to properly interpret Act 3 of Julius Caesar. For a moment in June 2017, the text of a play from 1599 about the death of a Roman Consul in 44 BC was at the heart of a public debate over the relationship between art and politics. 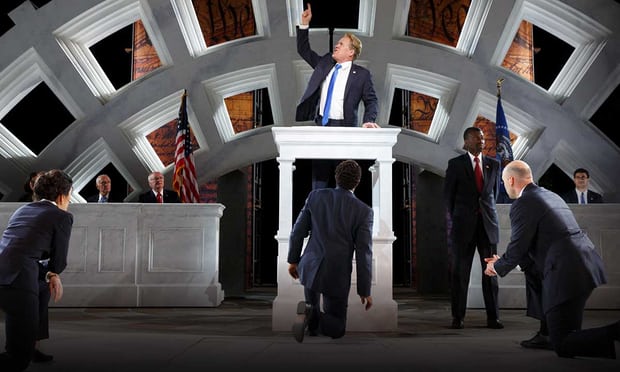 Per the performance, this was a Caesar who could stab a man on fifth avenue and not lose a supporter.

Most surprising to me was the outpouring of reactions to the controversy that framed it as one over interpretations of the play. These responses attempted to announce, as clearly as possible, that Julius Caesar is not a play that endorses political violence – and they were built upon textual arguments and close-readings.[1] These responses, from sources like The Guardian and The New York Times to The AV Club and The Atlantic, centered on the idea that a sufficiently skillful reading of the text of Julius Caesar would clear up any confusion over whether or not the production supported the actions of the Roman conspirators. By extension, this assumption meant a skillful reading would also appropriately address – and perhaps deflate – any anger of what the play was perceived to say about President Trump. For these responses, the portion of the public angry about the performance was simply missing the point of the play, or as Atlantic frames it, it was a case of “[m]isplaced [o]utrage.” The Guardian piece brings in Stephen Greenblatt to explain how dissenters are missing “the point of the play.” Even the statement by the theater itself is built partially on this premise, stating “Shakespeare’s play, and our production, make the opposite point: those who attempt to defend democracy by undemocratic means pay a terrible price and destroy the very thing they are fighting to save.” Invoking the authorial voice of Shakespeare alongside their own production decisions, the statement reads as not only a defense of artistic integrity, but also a pointed claim: at the heart of the controversy is a misreading of Julius Caesar.

Now, these responses also seem intent on producing a singular interpretative lens through which to view the play. These readings gloss over the idea that while one can read Julius Caesar as a play that is deeply skeptical about the conspiratorial action of figures like Cassius and Brutus, it can also be read as a play in which a demagogue exploits a mob of Roman citizens and preys upon their anger and resentment to compel them to destructive violence. This notably includes a scene in which the mob tears a poet to shreds because they dislike his verses, an equally prescient interpretation. However, for me, the fascinating aspect of these responses lies less in the specific interpretations that they provide for Julius Caesar, and more in the underlying assumption that the entire ordeal stemmed from a debate over the textual meaning of Act 3 of Julius Caesar, with the accompanying suggestion that this would be cleared up through the authoritative voices of individuals who were simply better readers. This move signals an important divide in how the various voices in the conversation conceptualize the place of the stage (and other arts) in public discourse. Shakespeare, these responses seem to imply, is more in danger of being misread than anything else. The political undercurrents of the play are not dangerous; rather, the possibility that they will be misunderstood is dangerous and that must be warded against.

Central to this conversation is the implication that the theater is a site of political tension and that the interpretation of this tension can be, and often is, a deeply political act. This is certainly not a new debate. For another examination of the relationship between theater and the present administration, see Ashley O’Mara’s Persuasive Performance: Theater and Conversion. Tensions surrounding the theater and the role of drama in the Anglophonic world date back to the foundation of the first public theaters and in my next post, I’m going to explore how debates over the place of the theater in public political life have evolved since Shakespeare’s work were first performed on the London stage.

[1] Putting my own personal interpretative cards on the table: Julius Caesar is not a play that endorses political violence. Also, it should be noted that the original story that generated anger around the performance neglected to mention that the play in question was Julius Caesar.

Evan Hixon is a third-year Ph.D. student in the English Department. His studies focus on Early Modern British theater with an emphasis on Shakespeare, political theory and Anglo-Italian relations. His current research work examines the rise of English Machiavellian political thought during the reign of Elizabeth I. 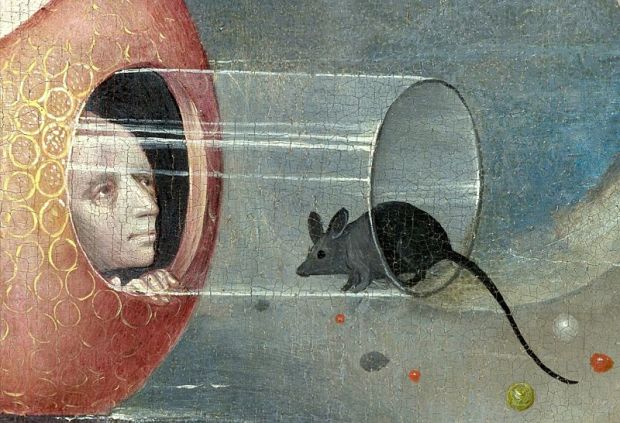