Recently, my coursework on Hollywood Melodrama engaged me with reading portions of Helen Hanson’s book, Hollywood Heroines: Women in Film Noir and the Female Gothic Film.[1] This text represents an amazing work of scholarship, connecting well-researched critical feminist histories, studies in the formation of literary and filmic genres, and close-readings of the narrative representations of heroines in Classic Hollywood films.

Hanson’s history of gothic fiction, which makes up the majority of her second chapter, related several functions of the gothic mode:

In all of these forms, the gothic mode[2] traverses between the past and present, highlighting tensions between society’s desire for progress, and an ever-present fear of change. In this way, it serves as a mirror for cultural anxieties; a mirror which frequently attracts the attention of new and veteran scholars alike.

Dracula is one famous example frequently discussed in college classrooms; the text thrives on the anxieties of the British public in the late Victorian period. It addresses fears of foreigners through the figure of Dracula, an aristocrat from Eastern Europe. It reflects the fear of new modes of emerging femininity in the form of the New Woman as embodied in fragmented forms by Mina Murray and Lucy Westenra. Even concerns about tensions between religion and rationality find voice in the pages of the novel.

Bela Lugosi as the foreign and inscrutable Dracula (1931, Universal)

However, these “cultural anxieties” of the past represent fears that the novel both critiques and re-inscribes in equal measure. Dracula is a foreign danger, but he is foiled in part by the American foreigner Quincey Morris. Mina’s technical literacy as a New Woman becomes essential for the defeat of Dracula. More importantly, we can now look back on these “cultural anxieties” and acknowledge the foolishness of their sources: sexism regarding women’s positioning outside the domestic sphere, and a xenophobia of foreigners moving into Britain from all corners of its crumbling empire. These anxieties feel “backward” now: an ideology from another time.

While these instances from criticism of a single specific text do not constitute a full definition of “cultural anxieties,” they do help to situate the term within its common usage. “Cultural anxieties” usually indicate societal fears that a contemporary reader can acknowledge as dependent on historical context. These fears may no longer function in the same way in the current cultural environment – one which the terminology implies has ostensibly progressed from the past.

The tendency of historiographic critique to locate anxieties in a moment from the past continued to haunt me as I moved forward through Hanson’s argument. This notion of “past-ness” lent to topics by the use of the term “cultural anxieties” felt particularly troublesome as I engaged Hanson’s reading of the 1944 film Gaslight.[3] This film revolves around Paula (Ingrid Bergman) and her relationship with the abusive Gregory (Charles Boyer), who uses deception, contradiction, and misdirection to convince Paula that she is losing her mind, and that her grip on reality has faltered. 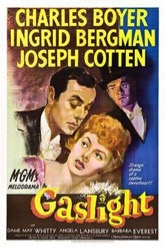 As Hanson approaches her discussion of female gothic films, Gaslight among them, she quotes feminist film critics Tania Modleski and Diane Waldman, who suggest that the female gothic cycle in Hollywood “expresses anxieties of shifting gender roles, and the social upheaval of World War II, from a female perspective.” She goes on to quote them directly: “The fact that after the war years these films gradually faded from the screen probably reveals more about the changing composition of movie audiences than about the waning of women’s anxieties concerning domesticity” (47-8). Not only are the anxieties displayed in Gaslight rooted in the specific moment of Post-WWII America, they also revolve specifically around an “anxiety concerning domesticity.”

This exemplifies the trouble that I came to while thinking about our role as critics: Just as Paula is discredited for her emotional responses in Gaslight, so too is the film discredited from its ability to comment on an ongoing and ever-present feature of patriarchal society by its relation to the term “cultural anxiety.” By tying these films to notions of anxiety, and a “retrogressive narration” that focuses on the past, contemporary critics and modern scholars alike miss something vitally important. Paula’s experience is not some rumination on past treatments of women alone. It is not tied solely to the shifting gender norms in Post-WWII America. It is a visceral consideration of the everyday violence suffered by women under patriarchy.[4]

Gregory corners Paula in an early scene of accusation. (MGM)

How many women have been told they are over-reacting, being too emotional, or not thinking clearly? How many women have had their experience of reality challenged by men and other women in misogynistic terms? How many women do not even trust their own minds because of this behavior? (There seems an easy tie-in here with the ways that domestic violence victims blame themselves for the behavior of their abusers, internalize the abuse, and even succumb to Stockholm syndrome). This is a constant and consistent experience for women living in a patriarchal society that values rationality over feeling. By tying these films to anxiety and the past, these texts are stripped of their commentary on this insidious — and constantly active — aspect of the patriarchy.

Instead of allowing for the recognition and critique of current violence against women, the historiographic location of Gaslight as a film about Post-WWII “cultural anxiety” may instead serve to elide the accusatory and critical nature of its content, and its application to our present moment. While our habit to historicize serves as a vital and useful aspect of the discipline, it may be equally important as feminist scholars to acknowledge the ways that these cultural anxieties go unresolved across time.

In the end, this reflection becomes less about the use of any one term (although the build-up of rhetorical weight and precedence placed upon, and into critical terms certainly merits further consideration). Instead, what it has prompted me to consider is the very nature of historicizing patriarchal violence. By historicizing a text so thoroughly within its time, we reap the rewards of insights that only a text’s context may grant us. However, we also run the risk of limiting the text’s ability to witness to a larger, historically mobile female experience of marginalizing violence. Hanson argues for this form of critique as well. She soundly rejects the psychoanalytic readings of early feminist engagement with female gothic melodrama (which often produced a deterministic reading) in favor of suggesting a critical vision that offers “a narrative trajectory as a female journey to subjectivity. This journey has a change in relation to socio-cultural shifts in gender relations coincident in the period” (xvi). Here, her attention calls for a scholarships that locates without functioning deterministically; one which approaches a text both in the local context of its era, and the trans-historical mode of its critique.

If current readers and critics keep this bi-focal view, looking at texts in both their local and trans-historical forms, we gain the ability to ask why a film so tied to the gender politics of 1940s America can still speak so directly to women’s experiences in 2017.

[2] The “female gothic” rises out of this gothic mode. First discussed by Ellen Moers in her book Literary Women (1963) the term female gothic refers specifically to texts written by and for women.

[3] Patrick Hamilton’s 1938 play Gas Light originated the term now used in common parlance to describe the manipulative psychological abuse which functions by instilling in the victim a doubt of their own experiences of reality. This play serves as the source material for the 1944 film, directed by George Cukor.

[4] My argument here is meant in no way as a disavowal of the arguments presented by Hanson, Modleski, or Waldman, but rather a reflection on the rhetorical weight of the terminology that our discipline utilizes and the methodological practices we employ.