In my final foray into Hannibal, I will examine the final season and its tragedy and seduction. After the violence of “Mizumono,” the season two finale, Hannibal escapes to Italy, his pursuers scattered and recovering from their injuries. Driven by vivid hallucinations and a grisly murder, Will sails the Atlantic to seek Hannibal out. Will’s obsession with Hannibal lures him into a deep web of seduction, mirroring, and finally, unity through violence.

Before we are able to fully understand the tragedy of the reunion between Hannibal and Will, it is important to explore the extent of Hannibal’s trauma in “Mizumono.” Rather than anger, Hannibal responds as if he has been hurt, acting as the betrayed party. In a flashback, Hannibal discusses forgiveness with his therapist-confidante, Dr. Du Maurier. “Betrayal and forgiveness are… best seen as something akin to falling in love,” she explains. However, Hannibal counters this, saying “You cannot control with respect to whom you fall in love.” The framing of this conversation makes it clear they are both speaking of Will. In Hannibal’s grief, he reaches out to Will in his typical fashion. 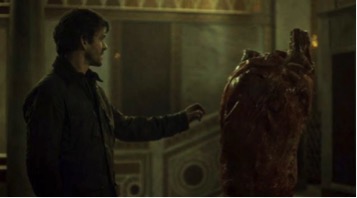 Impersonating a museum curator, Hannibal befriends a young, attractive man, Anthony Dimmond.[1] When he is invited to the home Hannibal and du Maurier share (playing the role of husband and wife), Dimmond casually and flirtatiously proposes a threesome. After looking to du Maurier for guidance, Hannibal admits “it’s not that kind of party.” Rebuked but intrigued, Dimmond falls right into Hannibal’s trap: he beats Dimmond with a decorative statue and savagely breaks his neck. Hannibal then transports the body cross-country, mutilating it to form the shape of a human heart which he leaves in a church for Will to find. It’s a gruesome Valentine, and one with a clear message: Hannibal’s heart is broken. Italian detective Pazzi observes “Is Will Graham here because of the body, or is the body here because of Will Graham?” The aftershocks of Hannibal and Will’s mutual betrayal are felt as distantly as Europe, placing them in a difficult and peculiar position of forgiveness.

Will’s response to Hannibal’s hurt is not a pursuit, but a seduction. Upon tracking Hannibal to a maze of church catacombs, Will calls into the darkness “I forgive you.” The exceptionally painful nature of the relationship between these two men muddies the scene. In their previous moments together (in the season two finale) Hannibal guts Will and murders Abigail, a young woman that Will had begun to view as a surrogate daughter. And yet, despite this pain, there is no uncertainty or disingenuousness in Will’s voice.[2] Rather, it is Will’s method of signaling the start of their web of seduction and violence. After Will makes this statement, he leaves immediately. He does not pursue Hannibal aggressively, but instead invites him to give chase by retreating back to Hannibal’s childhood home.

Will leaves Hannibal a Valentine of his own

In an attempt to better understand Hannibal’s history and trauma, Will seeks out Hannibal’s birthplace in Lithuania. There, he begins to understand Hannibal’s genesis as a killer, starting with Hannibal’s forced cannibalization of his young sister Mischa. With new insights, Will leaves to reconnect with Hannibal, but not before leaving behind a gift of his own: a body presented in a remarkable fashion, reaching out to Hannibal through the man’s own art form.

When Will finally returns to Hannibal, it is from a place of understanding and confidence. Although the nature of Hannibal as a character makes it impossible to fully understand him, Will’s revelations about Hannibal’s past offer clarity into their relationship. Will admits that he already defines his life in terms of his relationship with Hannibal, but understands that Hannibal’s own expression of his past is blurrier. However, their paths forward are linked; they are led inescapably to each other.

Will and Hannibal reunite in the latter’s favorite art gallery

Despite the inevitable weight of the past, the long-awaited reunion of Hannibal and Will is powerful moment of brightness and pleasure. “If I saw you every day, forever, Will, I would remember this time,” Hannibal remarks, gazing at Will with adoration and open affection. There is a sense of palpable relief as the two men come together. Surrounded by the beauty of the art gallery and the symmetry of the shot, it is easy for us to forget the trauma that Will has experienced at Hannibal’s hands. We can almost believe forgiveness. Remarking upon the twisting intimacy of their relationship, Will explains “We’re conjoined. I’m curious whether either of us can survive separation.” This comment speaks frankly to the relationship between Will and Hannibal. They remain obsessed with each other to the point that they are all the other can think about, all the other longs for. 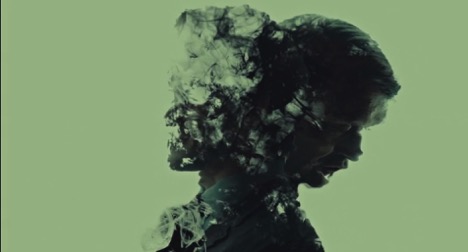 The tender moment in the museum is shattered as the two men walk out side by side. In a moment painfully resonant with “Mizumono,” Will attempts to stab and kill Hannibal. This attempt is thwarted by Hannibal’s childhood caretaker, Chiyoh, who shoots Will through the shoulder, saving Hannibal. True to Will’s prediction, he cannot be separated from Hannibal, attempts to do so only bring them closer. Once Hannibal has dragged Will to safety, he disrobes him, embraces him, and tends to his wounds. The intimacy of the scene is gentle, but unsteady. The camera lingers over Will’s delicately arched neck and vulnerable form. Even when Hannibal literally places the knife back into Will’s hand, it is to emphasize his weakness. “You dropped your forgiveness, Will,” Hannibal says, seeming more intrigued than hurt. He is fascinated by Will, and by their inability to fully separate.

Will and Hannibal in their final moment of unity

Will and Hannibal’s link reaches its crescendo in the season three finale “The Wrath of the Lamb.” Having chased and been chased by serial killer Francis Dolarhyde, Will and Hannibal are finally united in their violence. In a final and bloody confrontation, the two men kill Dolarhyde with knives and teeth, each giving themselves over fully to the fervor of the fight. With Dolarhyde slain, Will and Hannibal fall into each other’s arms, coated in each other’s blood and exhausted from the fight. “This is all I ever wanted for you,” Hannibal finally says to Will. Hannibal is delighted by Will’s violence, the joy he has taken in killing. “It’s beautiful,” Will admits, before pitching them both over the cliff’s edge and into the turbulent waters below.

Will and Hannibal are unable to survive separation. Like a rubber band, attempts to pull away only send them back together until the only option left is to break.. Their trauma and torment is so wrapped up in the other’s existence that even living is impossible while the other still breathes. Will’s final act of murder-suicide allows the only modicum of agency in his relationship to Hannibal: choosing when it will happen. By taking responsibility for Hannibal’s destruction, Will accepts their unity, but is unable to allow Hannibal his freedom. His victory is bittersweet, but it is ultimately heroic.

[1] In many ways, Dimmond resembles Will: the same dark, curly hair and scruffy jaw.

[2] This is especially important as Will’s character is shown to have difficulty lying.

Molly is an MA student pursuing her degree in English Literature with a focus on Game Studies and New Media. She uses these fields to explore her additional interests of race, gender, sexuality, and LGBT representation. She has also studied Victorian literature, the Gothic, and 19th century American literature. Her teaching interests include film, graphic novels, and popular culture.