As I mentioned last week, the original premise of LGBT history month was to spend some time each day in October learning about a new LGBT “icon,” some from current LGBT history and some from the past (and some who are quite problematic, but more on that next week). “Icon,” to me, is a curious word choice. We use it colloquially to describe media “icons” like Ellen Degeneres or George Takei. We also sometimes talk about “icons” of literature, like Chicana scholar Gloria Anzaldúa, or everybody’s favorite flamboyant Victorian, Oscar Wilde.

Where I’m coming from as a researcher of Early Modern Catholicism, however, “icon” carries a lot more political weight. Intended as representations of holiness, artistic icons of saints offered their venerators a means of more immediate connection with someone from Christian history with whom they could identify. Icons were also instrumental for educating the masses about their faith heritage. These were especially important qualities of Early Modern iconography for English Catholics during the Reformation, when the dominant ideology was bent on either converting or persecuting all the Catholics out of England — literally destroying their icons in the process. Icons thus also served as a cause around which the community rallied.

We can see reflections of this kind of political iconology (so to speak) in the icons of LGBT history. Looking to figures in which one sees oneself, especially famous figures, is a way of seeking support in a hostile setting where one is “different” or unwelcome. A significant purpose of the “It Gets Better” project (conveyed through that modern iconographic medium, YouTube) has been to offer  words of encouragement and affirmation to troubled LGBT youth from people just like them who have suffered for their sexuality but have finally arrived at a “better” place. Likewise, especially during times of persecution, to seek out icons of all orientations from the past and share them with others inside the community builds connections among individuals in the community, and between the community and its past. 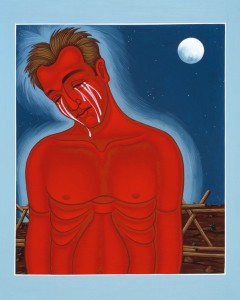 A key goal of LGBT history month is thus recuperation — locating where heteronormativity has obscured queerness and bringing queer icons back into the light, to resist the status quo which delegitimizes gender and sexual minorities by declaring them modern “corruptions” with no historical precedent. Although visibility in recent decades has actually made things better for LGBT Americans, it’s still not better enough for many, perhaps especially (ironically) in religious communities.

Thus queer religious studies is a growing field with both academic and activist investment. Frederick Roden writes about the Catholic aesthetics of Katherine Bradley and Edith Cooper, a Victorian couple who wrote together as Michael Field. Leslie Feinberg names Joan of Arc as one of hir transgender icons for preferring execution over suppressing her desire to wear men’s clothing.1 And many gay Christians will point to David and Jonathan from the Book of Samuel as models for the Christian same-sex married life. This is the process of identification with historical figures that guides much of the everyday practice of LGBT history. David Halperin, who literally wrote the book on How to Do the History of Homosexuality, describes the process by saying, “Identification gets at something, something important: it picks out resemblances, connections, echo effects. Identification is a form of cognition,” requiring “the ability to set aside historical differences in order to focus on historical continuities.”2

Would Michael Field have described themselves as homosexual? Possibly—the word was coming into use towards the end of their career. Would Joan of Arc have considered herself to be trans*? Not likely, at least not in fifteenth-century France—she had different words for describing why it was her God-given prerogative to dress like a man. Were David and Jonathan the original same-sex couple? In a way, maybe, but that’s not really the point. What is important is the possibility of recognizing the queer aspects of these figures and applying them to modern settings. Like Early Modern Catholics saw themselves in the icons of historical saints, we can bridge past and present to make one long LGBT history by seeing ourselves in these queer icons.

Next week: The problems of writing over history

Ashley O’Mara is a first-year PhD student and University Fellow in the English department. She studies Ignatian imagination and representations of sacred femininity in Early Modern poetry. In her free time, she writes creative nonfiction and reads BBC Sherlock fanfic “for research.”